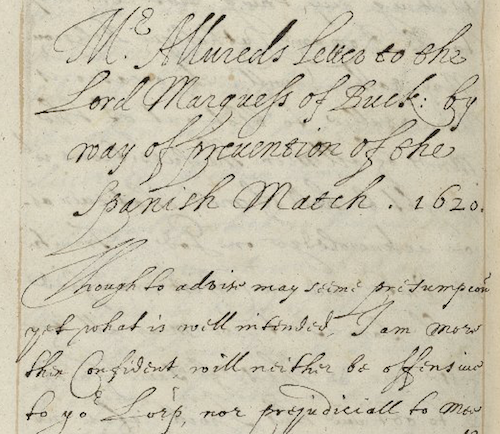 Before the outbreak of Civil War in 1642, England developed a large, influential and often radical pamphlet literature. Speeches, learned briefs, and scaffold apologies joined character assassinations, secret histories and conspiracy theories in a jumbled literary underground. Pamphlets were produced commercially and informally and circulated across the kingdom; they fascinated readers and influenced events. Large numbers of copies survive - probably in the tens of thousands - suggesting a significant readership. Nevertheless, this pamphlet literature is rarely mentioned and even more rarely analyzed by historians or literary critics, not least because it was written by hand rather than printed with movable type.

This project aims to survey the vast hidden archive of early Stuart England's manuscript pamphlets. In collaboration with the British Library, this project will construct a database of manuscript pamphlet texts, bibliographic information, and digital images. This will allow users to search transcriptions of the pamphlets; analyze the distribution of copies through time and space; and see how such materials were presented: large and small, elaborate and plain, professional and amateur. The project will conduct additional research in the private papers of Francis Russell, fourth earl of Bedford, who was a major political figure of the early Stuart era as well as a reader and collector of manuscript pamphlets.

The research has three main purposes. First, the project team and associated researchers will use the database to ask and answer fundamental questions about the content of early Stuart political ideas, the genres in which they were expressed, and the circulation of those ideas through the kingdom. Second, the studies produced by the project and the underlying dataset will be useful to historians, literary critics and scholars of political thought, providing a major new set of sources and a useful new set of research tools. Third, the project will prove useful to non-academic beneficiaries. Events at local archives, undertaken with the advice of the British Library, will raise the profile of the resource, and assist such archives and their users in capitalizing on manuscript pamphlets within their own collection; further, working in partnership with the Historical Association, the project will convene a Bristol-based group of secondary school teachers to help build a teaching resource for use in A-Level teaching, which will be available on the website and promoted by the Historical Association.

Richard Bell is a Research Associate in the Department of History at the University of Birmingham. He recently completed his Ph.D. at Stanford University on the politics of imprisonment for debt in seventeenth-century London and was a 2016-17 Scouloudi Fellow at the Institute of Historical Research in London.

Tim Wales has worked extensively on the social, political and cultural history of Early Modern England. He has published on seventeenth-century poverty and welfare and on informal policing in later Stuart London. He is the author of over twenty articles for the Oxford Dictionary of National Biography was compiler of the The Cromwell Association Online Directory of Parliamentarian Army Officers. Most recently he has been a Research Associate on the 'Intoxicants and Early Modernity' project at the University of Sheffield. He is a co-editor of Volume 1 of the forthcoming new critical edition of the letters and speeches of Oliver Cromwell.

Mike Jones has over eighteen years’ experience of software development, working with numerous software languages, frameworks, open standards and metadata standards. He has expertise and knowledge of Python and Java development, XML technologies, and web and mobile development. Since joining the University of Bristol in 2006 Mike has worked on a large number of externally funded projects, including the AHRC-funded Know Your Bristol On the Move and Outstories projects

Jon Hallett is the systems administrator for the Research IT team at the University of Bristol. He has worked in university IT for over twenty years and in that time has administered the full stack of technologies in use in higher education, from patch cables to departmental IT infrastructure to critical corporate systems. His skills include Puppet, Python, Perl, Unix, databases and networking.

Richard is a project manager for Agile Collective Ltd and tutor in early modern literature.